This is a new one: fabric privacy screens for homes. It's only a matter of time before they come to Privatopia and join flagpoles, flags, swingsets, clothelines and treehouses as the latest battlefront between the HOA commissars and inmates.
Posted by Fred Pilot at 7:08 PM 1 comment: Links to this post

So it turns out that a swingers club operating out of a 4000 square foot home in a gated community is a business, according to this HOA.

The suit argues that the late-night parties are business operations because charges of up $75 per couple are listed on advertisements for the events.
HOA policy doesn't allow for businesses within the neighborhood. Specifically, the petition states that Carter is "...operating a business in violation of the Covenants which has become obnoxious, offensive, an annoyance, and a nuisance to the neighborhood, which is also a violation of the Covenants."
Other neighbors who spoke with News 8 but asked not be identified also expressed concern about the nature of the parties, and about the noise and clientele driving through the neighborhood late at night.
It wasn't immediately clear if the operation violates any county ordinance.
The lawsuit asks for an injunction, as well as attorney's fees and unspecified damages.
Posted by Evan McKenzie at 7:00 PM 1 comment: Links to this post

"Laws that give homeowners association debts "super lien" priority over all other claims have been a long-standing threat to servicers. But it wasn't until a pair of recent court rulings came out in favor of HOAs that industry vendors started to look at their existing data and technology to develop products for servicers to manage these risks. There are super lien laws on the books in 21 states, plus Washington, D.C. Historically, they've rarely been invoked, but when they are, the results can be devastating for mortgage debt holders. In a Nevada case ruled on last year, the first-lien mortgage holder lost its claim to an $885,000 debt because of $6,000 in delinquent HOA dues. "That gave everybody the awareness that this is not something that they should take lightly," said Ann Song, vice president of REO management for LRES, an industry vendor that recently launched HOA lien services for originators, servicers and investors...Vendors that have flooded the market with super lien-related products include Black Knight Financial Services, CoreLogic and LRES, as well as a partnership that incorporates services from MMREM and Equifax. The vendors all say their services can identify properties subject to super-lien laws and check for active HOA liens. LRES and MMREM will also help servicers negotiate HOA lien disputes. (The two vendors are both REO management companies, while LRES also has an appraisal services unit.)"

Superlien statutes give HOA/condo association liens for unpaid assessments priority over the first mortgage, at least in some amount. They vary from state to state.  The idea is to protect the association from having its entire lien wiped out when the bank forecloses on the first mortgage and there is nothing left over to pay the association for unpaid assessments prior to the foreclosure.  The solvency of community associations hit the radar screen of policy makers since the crash of 2008. Foreclosures wrecked a lot of homeowners' lives and also left an enormous number of associations in terrible financial shape.
Posted by Evan McKenzie at 9:59 AM 2 comments: Links to this post

"Almost 43 percent of the high-hazard earthen dams in Ohio are on private land — about 200 in all. They’ve been designated as such because if the dams fail, people who live in the water’s path likely will die. Like those owned by the state, private dams pose a serious threat in part because the Ohio Department of Natural Resources, the state agency that inspects dams, goes easy on dam owners. It lets some dams remain dangerous for decades as it tries to negotiate repairs. Owners also are to blame: They often are ignorant about dam safety and lack money for repairs. “I think people are not aware of the liability that comes with the dam. ... There’s potential for great disaster, and people don’t realize that,” said Hans Gottgens, a professor of environmental sciences at the University of Toledo who has studied dam failure."

The condition of public infrastructure in this country is deplorable, and private infrastructure may be even worse.  But we are doing a great job of blowing up infrastructure in other countries and then paying private contractors to rebuild it. So there's that.  Thanks to Deborah for this link.  By the way, take a look at this list of high speed rail miles of track by country and see where USA ranks. This is what happens when a country is run by people who think the only proper roles of government are to make war and to serve as a source of plunder for the rich.
Posted by Evan McKenzie at 8:04 AM No comments: Links to this post

How California Homeowners Are Dealing with Drought | Digital Trends

How California Homeowners Are Dealing with Drought | Digital Trends

"Per the new regulations, watering lawns within 48 hours of “measurable” rainfall is a finable offense. Some people are forgoing their lawns all together, either following the State Water Resources Control Board’s urgings to let the die or finding creative solutions. Some are painting their lawns green. Others are ripping them up and putting in artificial turf (to the dismay of homeowners associations) or shrubs and plants that thrive in drought conditions (known as xeriscaping), thanks to rebates available in some areas."

Maybe the political system's reflexive deference to HOA regulations has finally run out, along with the state California's water supply. After all these decades of state legislatures and courts acting like the whims of some long-gone developer and his lawyer are holy writ, it would be nice to see some recognition that private law-making is subordinate to public policy.
Posted by Evan McKenzie at 8:37 AM No comments: Links to this post

File this one in the "some people never learn" category:

"A Franklin homeowners association has agreed to pay $156,000 to parents who said they were unfairly barred from building a therapeutic space for their two children with Down syndrome. The specially designed sun room would have been a place for Charles and Melanie Hollis' young kids to play and receive physical therapy, but the Chestnut Bend Homeowners Association denied their request to construct it based on concerns about the way the addition would look, a 2012 federal lawsuit alleged. That, the lawsuit said, constituted discrimination and a violation of the Fair Housing Act, which makes it illegal for agencies to turn down what are called "reasonable modifications" that make it possible for residents with disabilities to more fully enjoy their homes."
Posted by Evan McKenzie at 11:11 AM No comments: Links to this post

"Homeowners have sued the village of Barrington Hills after being denied permission to move into their newly built mansion because of a dispute over the number of trees on the property. Najamul and Nausheen Hasan built a 9,200-square-foot estate on a five-acre lot they purchased in 2007, but they sued last week after they were recently denied an occupancy permit by the village. The Hasans claim in the suit that the village's tree ordinance — spelling out how builders must replace the trees that they remove during construction — is unconstitutional. They also say their civil rights are being violated, and that the matter is "of an emergency nature" because they have leased their residence in Hoffman Estates after being told by the village's building officer that they would be granted a temporary occupancy permit. The temporary permit for occupancy was later denied."

This complicated dispute about the number and species of trees that the Hasans are supposed to plant, to replace the ones they cut down during construction, all started when the president of the HOA contacted the village of Barrington Hills.  She says she "speaks for the trees."  Remember the Lorax, from Dr. Seuss? That's what he said. One of my favorite stories, by the way--not to take sides in this Barrington Hills tree saga. 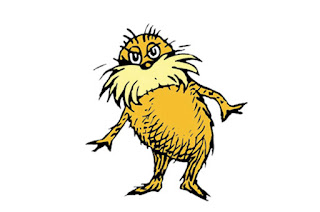 Posted by Evan McKenzie at 10:20 AM No comments: Links to this post