Residential gun sales hot topic in Pleasant Hill - San Jose Mercury News:
Whether Tedjakusuma keeps inventory at home is a major concern of residents who believe residential gun sales threaten public safety. The U.S. Department of Justice's Bureau of Justice Statistics recently reported that from 2005 to 2010, an estimated 172,000 guns per year were stolen during residential burglaries.
--------------
Selling guns from a suburban home, using the internet--the American entrepreneurial spirit knows no limits.
Posted by Evan McKenzie at 6:15 PM 3 comments: Links to this post

Class action lawsuit filed against some Arizona HOA's | azfamily.com Phoenix:
Robert hired his own attorney, Roger Wood, who told 3 On Your Side that he's discovered thousands of liens and lawsuits that he claims were wrongfully filed against Arizona homeowners, like the Leathams.

As a result, Woods recently filed a class action lawsuit against AAM, claiming it, and 26 other management companies, violated fair debt collections practices by charging illegal and exorbitant collection fees.

“That act is set up to help consumers, to help people like my plaintiffs in this case to protect themselves from unjust, unlawful predatory collection practices,” Wood explained.
--------------------
This one should be worth watching.
Posted by Evan McKenzie at 3:07 PM 2 comments: Links to this post


He said he wouldn't say what party such "declinists" tend to associate with, but "I can tell you they're losing power from coast to coast," he said, earning applause from the audience. And those who hung the nickname "Governor Moonbeam" -- "not a term of endearment" -- on him during his earlier gubernatorial terms "aren't around anymore, but I am."
California on Wednesday launched its new system for limiting greenhouse gas emissions by putting a price on carbon, as the state's Air Resources Board began auctioning permits to create a marketplace for such emissions. Businesses must either cut their emissions or buy permits from other companies for each extra ton of pollution discharged each year.
--------------------
Thanks to Fred Pilot for this link. I think California's diverse economy will make a big comeback.
Posted by Evan McKenzie at 9:21 AM 3 comments: Links to this post

Students build forts to bring comfort to central Edmonton: EDMONTON - Saying they want to inspire and spread the love, a group of architecture students is setting up an informal living room at various spots around central Edmonton. With used furniture and a tarp to block the wind, their “forts” will offer free hot chocolate and a casual place to socialize, starting Friday. The installation is meant to change to a physical space to encourage more social interaction between strangers on city streets, said Tara McCashin, a Dalhousie University student working at Manasc Isaac Architects Ltd.
-----------------------
You can do this only if you call it art. If you call it home, you have to move.
Posted by Evan McKenzie at 7:12 AM 1 comment: Links to this post

The photo on my Facebook badge on Veteran's Day (see below) was my father, George Evan McKenzie. He served in the US Navy in World War II. He was a disabled veteran who died of service-connected causes in 1985.

I would like to extend my thanks to all the veterans and service men and women who risk everything to protect us. 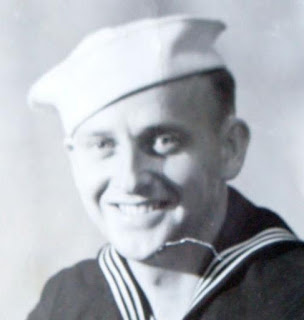 Posted by Evan McKenzie at 4:37 PM 2 comments: Links to this post

It is vital that any and all improprieties be exposed and dealt with by the proper authorities. It is also important not to assume that improprieties are common at HOAs in Nevada. One of the reasons these cases attract as much attention as they do is because they are the exception, not the norm.
------------
A bit of spin control by the Nevada CAI folks.  A major criminal conspiracy to take over and corrupt HOAs.  Lots of indictments, plea bargains and people turning up dead. Isolated incident No. 576,896.  Nothing to to see here; please move along.
Posted by Fred Pilot at 11:23 AM 2 comments: Links to this post