A Nevada Man Says His 3rd Amendment Rights Were Violated. Wait, What? | Mother Jones
The Third Amendment to the United States Constitution:

"No Soldier shall, in time of peace be quartered in any house, without the consent of the Owner, nor in time of war, but in a manner to be prescribed by law."
---------------------
And:  "Last week, a homeowner in Henderson, Nevada, filed a lawsuit in federal court alleging that police had violated his Third Amendment rights by forcibly entering his home to gain a "tactical advantage" in resolving a domestic violence incident next door."

The Third Amendment is hardly ever mentioned in constitutional jurisprudence. You could argue that it shows how anachronistic our Constitution is, in certain ways.  You see these very specific little provisions that don't make much sense out of their context in a particular time and place. But that also makes it all the more impressive that the broad phrases of the Constitution, the big, sweeping clauses like the Due Process Clause, Necessary and Proper Clause, and others, provide enough flexibility that we still have the same Constitution after all these years.
Posted by Evan McKenzie at 8:21 AM No comments:

New HOA laws require debt collection policy, licensed managers - The Denver Post
"That legislation was prompted, in part, by multiple " horror stories" from the past few years regarding homeowners associations, or HOAs. "We had a $750,000 embezzlement a few years ago ... what a black eye for the industry," said Cici Kesler, president of Association & Community Management, which manages homeowners associations in the metro area. The debt collection law requires all HOAs to set up a policy detailing basic information for homeowners. HOAs must also offer delinquent homeowners a six-month payment plan at least once before taking severe action. Under the licensing law, all community association managers, management company CEOs and executives will be required to attain a state license by July 1, 2015."
--------------------
Colorado responds to horror stories with new legislation.

Posted by Evan McKenzie at 4:05 PM No comments:

Hearings to address 3.1 million pages of documents | Las Vegas Review-Journal
Thanks to Shu Bartholomew for this update on the Las Vegas HOA fraud ring case, which is "the largest public corruption case brought by federal authorities in Nevada."  Chew on that concept for a moment.

"The mountain of evidence is part of the high-profile case against former construction company boss Leon Benzer, the accused mastermind of a HOA takeover scheme, and 10 others. The defendants, who were indicted in January, are to stand trial March 3. U.S. Magistrate Judge George Foley, Jr. scheduled a status hearing Wednesday to evaluate the process of turning over the evidence in the largest public corruption case brought by federal authorities in Nevada."
Posted by Evan McKenzie at 7:59 AM No comments:

'Bulletproof' Arizona security team raises hackles at Gogebic mine site : Ws
"Two members of the Wisconsin Legislature are asking Gogebic Taconite to remove masked security guards who are toting semi-automatic rifles and wearing camouflaged uniforms from the mining company’s site in the Penokee Hills forest. Photos of the guards surfaced over the weekend on the websites of mine opponents. Sen. Bob Jauch, D-Poplar, said Monday the guards are from Bulletproof Securities, an Arizona company that boasts a “no compromises security force.” “I’m appalled,” Jauch said. “There is no evidence to justify their presence.”
Jauch said he was especially concerned that the guards are carrying high-powered rifles more appropriate for fighting wars than for guarding construction equipment in a scenic forest that draws scores of hikers and vacationers in addition to mine protesters." 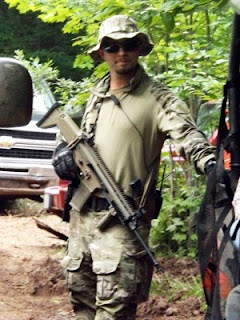 Charming.   And what is Gogebic Taconite?  According to Wikipedia: "Gogebic Taconite is an iron-ore mining company in development stage, based in Florida,[1] with a presence in Hurley, Wisconsin.[2][3] The company, owned by the larger mining outfit, Cline Resource and Development Group, is at the center of a dispute among politicians, community groups, environmental organizations, Native American tribal councils and various stakeholders because of a proposed mining project slated for operation in Iron and Ashland counties in northern Wisconsin."

update:  This blog has photos of these guys wearing masks.
Posted by Evan McKenzie at 6:53 AM No comments:

I have been off the air almost entirely since about June 22.  My children and I took a trip to Phoenix to help my oldest son get his new home in Phoenix lined up. He has taken a job there.  Then we headed for San Francisco and a five-day inn-to-inn hiking trip that included myself and my three children, my sister, her husband, and her daughter (my niece). Here is a quick summary of the trip:

Day One: On June 25, we combined public transportation and walking to get from my sister's home in San Francisco to the tiny town of Inverness, in the northwestern wilds of Marin County. We spent the night in the Tomales Bay Inn. The plan was to travel north to Inverness and then hike south back toward the city, finishing in Muir Woods. 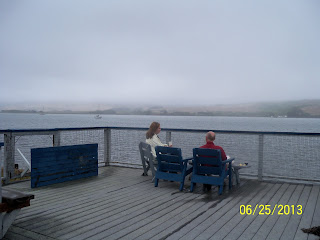 Day Two:  The hike back south began in earnest on June 26, when we hiked from the Tomales Bay Inn in Inverness to the equally tiny town of Olema.  We went through a maze of streets to the Inverness Ridge  Trail to the Sky Trail to the Z Ranch Trail to the Horse Trail, and down to the Bear Valley Park Headquarters, then down Bear Valley Road Highway 1 and into Olema, where we spent the night.  We estimated the distance at between 15 and 16 miles, and we went from sea level up to about 1400 feet and then back down to sea level in Olema. 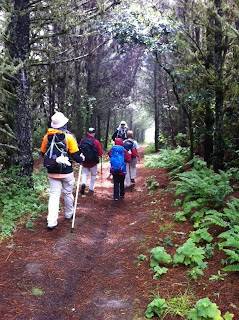 Day Three: This day, June 27,  was easier. We hiked from Olema down Taylor Park Road to the Bolinas Ridge Trail to Jewell Trail, to the Madrone Campground in Samuel P. Taylor State Park, where we spent the night with other family members in three cabins. Maybe 7 miles. 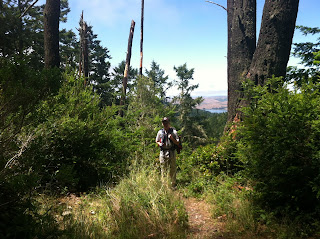 Day Four:  June 28 was by far the hardest day of hiking. We got dropped off at the Randall Trail head on Highway 1, a few miles from the state park. We hiked up hill to the Bolinas Ridge Trail and stayed on it until it became the Coastal Trail (including a detour onto an abandoned section that cost us at least 45 minutes), and then on that down to the Willow Camp Fire Road, where we made a steep descent (from 2000 feet to sea level in 1.8 miles) down into Stinson Beach. We all ran out of water somewhere on the Coastal Trail. We spent the night in Stinson Beach. 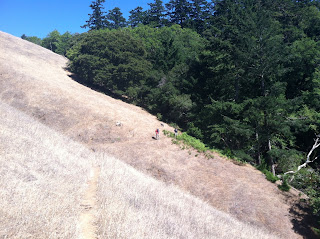 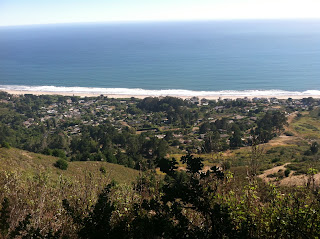 Day Five: Final day, June 29.  We took the Dipsea Trail all the way into Muir Woods to the Information Center, and that was the end of the hike. We caught the 66F shuttle bus to the Sausalito Ferry, rode the ferry to San Francisco Terminal One, walked to the San Francisco Muni, and took the train to Castro Street. From there we walked to my sister's house near Buena Vista Park. We happened to be in the middle of Gay Pride Weekend and the celebration of the Supreme Court's validation of same-sex marriage in California. Quite a conclusion to our trip! 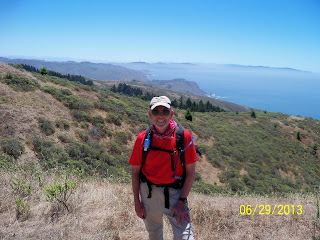 Should homeowners be paid for losing ocean views? Top N.J. court to decide | NJ.com
"New Jersey's top court is ready to make its ruling on whether homeowners should be compensated for losing ocean views when dunes are built. The state Supreme Court announced today that it will issue an opinion Monday in the case of a Long Beach Island couple who sued and won $375,000 to make up for the view they lost when their town built a dunes. The town, Harvey Cedars, appealed, saying that a house protected from a flood is more valuable than one that is not."
---------------
Interesting takings case from New Jersey. Did the city make the property more valuable, or take value from it?
Posted by Evan McKenzie at 7:04 AM No comments:

New HOA laws effective July 1 | The News-Press | news-press.com
From Florida:  Time to find out how many HOAs in the state?  That might be a good place to start.
Posted by Evan McKenzie at 7:02 AM No comments: