Fallen Bricks, Safety Hazards in Condo Complex - www.kmir6.com: PALM DESERT - Trash build-up. Overgrown weeds. Nails sticking out of pieces of wood. These are some of the concerns some residents have at Monterey Ridge, a gated condominium complex in Palm Desert.

"Our HOA Board of Directors seems to be pretty non-existing ignoring the 20 units that we have here. We have a lot of exterior issues going on with our buildings," explains a homeowner, Meredith Payne.
----------
Another condo complex spinning into the Tyler Berding death spiral? Film at 10 on KMIR News 6 Palm Springs.
Posted by Fred Pilot at 7:59 PM No comments: Links to this post

"Word is spreading on social network websites that protestors are expected today at Casa Di Amici, the condominium complex in Venice that has barred gay and other unmarried couples from living there. The condominium association approved an amended covenant allowing only married or single people to purchase or rent in the 160-unit complex off Jacaranda Boulevard. The only exemption applies to blood relatives living together."
---------------------
So here we go again. This is Florida, by the way, in case you hadn't already guessed.  You can read the amended declaration here.   Thanks to Jordan Shifrin for the link.
Posted by Evan McKenzie at 3:56 PM No comments: Links to this post

Another isolated incident!  But this one has an additional angle: a claim that the BOD asked the home owners to keep it quiet.

"A former Hollymead homeowners association treasurer has been charged with embezzlement, court records show. Patricia Anne Cuthbert, 43, stands accused of embezzling more than $73,000 from the Hollymead Citizens Association, the neighborhood’s homeowners association, between January 2008 and December 2012...The board of directors of the Hollymead Citizens Association informed residents last month that a slew of unauthorized charges had been made to the association’s bank account, but told homeowners to keep word of the audit quiet while police investigated the charges and the board continued to seek reimbursement. “They asked us to not make the audit public and to not even talk about it at cocktail parties because it could lower our property values,” Moruza said. Moruza is a member of Concerned Citizens of Hollymead, which is demanding changes to the homeowners association’s board of directors and greater transparency between board members and residents."
Posted by Evan McKenzie at 8:37 AM 1 comment: Links to this post

Bottom line on curb and street repair is bad news for homeowners - latimes.com

Bottom line on curb and street repair is bad news for homeowners - latimes.com

Thanks to Fred Pilot for this link to a story about a "curb assessment district":

"You've paid your taxes for decades, but your crumbling street hasn't been repaved since the Eisenhower administration. So you ask City Hall to step up, and the response goes something like this: Sure, we'll fix the street. But only if, first, you pay several thousand dollars out of your own pocket to fix the curbs. As crazy as it sounds, that's exactly what's happening in one Mar Vista neighborhood, where homeowners are voting between now and Aug. 21 on whether to establish a curb assessment district."
Posted by Evan McKenzie at 11:52 AM No comments: Links to this post

At Redmond Ridge, for example, clothelines are banned because they “pose a strangulation hazard” and work against creating a “clean, well-kept community.” The Seattle Housing Authority bans clothelines in an effort to keep children safe. And the Sammamish’s Heritage Hill development considers clotheslines “unsightly.”
-------------
Clotheslines get a pretty bad rap in parts of Privatopia, where they are suspected of strangling kids.

Clothesline crusaders call laundry flap overblown | Local News | The Seattle Times: Former state Rep. Deb Hall Eddy, D-Kirkland, not long ago considered sponsoring a bill to prohibit homeowners associations from banning clotheslines after a group of high-school students came to her with the idea. She didn’t get far when the powerful homeowners association lobby came to Olympia intent on crushing the idea because it saw the notion as state intervention in homeowners’ rights.

“It wasn’t going anywhere until you’ve got some equally powerful interest group in Olympia advocating for it,’’ she said. “Unfortunately, we create legislation by whether there is an interest group, not by what’s in the public interest.’’

But a number of energy conservationists say it’s time to reconsider.

There are 19 so-called “right to dry” states, including Oregon and California, that have outlawed bans on clotheslines.
------------
Community association industry astroturf wins out over clotheslines in Washington.  But not in some other, sunnier states.
Posted by Fred Pilot at 11:26 PM No comments: Links to this post

"In a 23-count indictment handed up on July 23, a federal grand jury said it believes Sarah Underwood, 34, stole $311,280 from Fall Creek Condominiums between May 2011 and September 2012.   Underwood worked there as a bookkeeper and payroll clerk."
Posted by Evan McKenzie at 11:19 AM No comments: Links to this post

Zhang Lin builds mountain on apartment block in Beijing, China, to create dream penthouse | Mail Online
So you think you have problems with one of your neighbors in the condo?  Not really:

"A Chinese man has spent six years building his dream mountaintop villa - on top of a Beijing apartment block.  Eccentric Professor Zhang Lin shifted tons of rubble and rock onto the roof of the building to construct the outrageous home which looks like it has been carved from a mountainside." 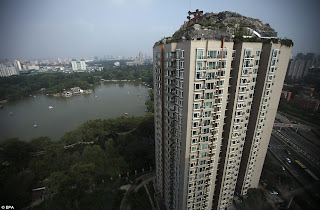 Posted by Evan McKenzie at 11:17 AM No comments: Links to this post