Condo and HOA Law by Donna DiMaggio Berger, Esq.
Now, where do you think Donna Berger got the idea for the layout of her condo law weblog? Hmmmm.
Thanks to Fred Pilot for pointing this out.
Posted by Evan McKenzie at 1:30 PM 13 comments: Links to this post

Brutal death sours cup joy | World news | The Observer: "The incident is the clearest demonstration yet that many of Rio's favelas are so lawless they are 'parallel states', with their own leaders and rules. Estimates put the membership of drug gangs at 100,000 - more than the entire police force. With an armoury of about 65,000 firearms too, the traffickers are a parallel army. 'They are the law, the only law, and you have to obey them whether you like it or not,' said Clarissa Fonseca de Bastos, a street vendor who lives in a favela known as the Morro da Formiga, or Anthill.

In some slums, say residents, drug lords decide when shops will open and close, who can enter or leave and where and how houses can be built. Their influence is also beginning to extend to middle-class areas and their growing boldness was shown a fortnight ago when the windows of Rio's mayoral office were shattered by bullets."
=============
We talk about outlaw private governments, but in Brazil they really have them.
Posted by Evan McKenzie at 11:39 PM No comments: Links to this post

Fannie Seeks $15.3 Billion in U.S. Aid After 10th Straight Loss - Bloomberg.com: "Feb. 26 (Bloomberg) -- Fannie Mae, the mortgage-finance company under federal conservatorship, said it will seek $15.3 billion in aid from the U.S. Treasury after posting a 10th straight quarterly loss. A fourth-quarter net loss of $16.3 billion, or $2.87 a share, pushed the company to request its fifth draw on an unlimited lifeline from the government..."
-----------------
This is going so well. I suppose we can file this in that bulging folder called "lagging indicators"?
Posted by Evan McKenzie at 5:13 PM No comments: Links to this post

HOA? No. The City of Orange.

Orange County's law-breaking landscapers | MNN - Mother Nature Network: "An Orange County, California, couple face steep fines — and possibly jail time — for replacing a conventional grass lawn with drought-tolerant landscaping."
-----------------
You might think that a city named after a fruit would be a little more tolerant of an herb garden. But no. Not with all those HOAs around that the city has to imitate!
Posted by Evan McKenzie at 2:53 PM 1 comment: Links to this post 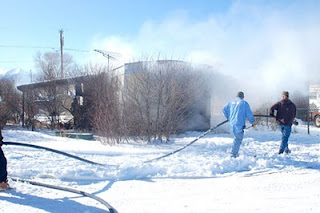 Wet Mountain Tribune - Page 1 - 2/25/2010: "Alice French, who has lived in the trailer for a number of years, had called her son, Brad, to help thaw a frozen water line. Apparently, Brad was using a weed burner, which is a device hooked to a small propane tank, to thaw the water line under the trailer. “The underside of the trailer caught fire,” said Livengood. “I suspect there was a propane leak under the trailer because Brad reported hearing a ‘whoosh’ immediately before the fire started.” Livengood also said Alice had mentioned smelling propane a few days before."
-------------------
And that's a slice of life from Wet Mountain, Colorado.
Posted by Evan McKenzie at 2:49 PM No comments: Links to this post

CNN Political Ticker: All politics, all the time Blog Archive - CNN Poll: Majority says government a threat to citizens’ rights « - Blogs from CNN.com: "Fifty-six percent of people questioned in a CNN/Opinion Research Corporation survey released Friday say they think the federal government's become so large and powerful that it poses an immediate threat to the rights and freedoms of ordinary citizens. Forty-four percent of those polled disagree.

The survey indicates a partisan divide on the question: only 37 percent of Democrats, 63 percent of Independents and nearly 7 in 10 Republicans say the federal government poses a threat to the rights of Americans."
-----------
If we end up with federal government employees running the health insurance industry that number will go up.
Posted by Evan McKenzie at 7:50 AM No comments: Links to this post

Obama May Prohibit Home-Loan Foreclosures Without HAMP Review - Bloomberg.com: "Feb. 25 (Bloomberg) -- The Obama administration may expand efforts to ease the housing crisis by banning all foreclosures on home loans unless they have been screened and rejected by the government’s Home Affordable Modification Program.

The proposal, reviewed by lenders last week on a White House conference call, “prohibits referral to foreclosure until borrower is evaluated and found ineligible for HAMP or reasonable contact efforts have failed,” according to a Treasury Department document outlining the plan."
----------------
How does this "ease the housing crisis"? All it does is keep people in the homes they can't pay for. The HAMP program isn't really making all that big a difference.
Posted by Evan McKenzie at 6:40 PM 1 comment: Links to this post

Aloha Segregation - The Editors - National Review Online: "A bill expected to pass the House today with overwhelming Democratic support would accomplish something peculiar for a liberal republic in the 21st century: It would partly disenfranchise a portion of one state’s residents, create a parallel government for those meeting a legislated criterion of ethnic purity, and would portend the transfer of public assets, land, and political power from those who fail to satisfy the standard of ethnic purity to those who do. For these reasons and many more, the Native Hawaiian Government Reorganization Act richly deserves opposition."
---------
This is a conservative perspective on what I think could turn out to be an interesting law--if it passes the Senate and gets President Obama's signature. The fact that he was born in Hawaii and grew there makes it especially intriguing.
Posted by Evan McKenzie at 7:34 AM 1 comment: Links to this post

Climate scientists withdraw journal claims of rising sea levels | Environment | guardian.co.uk: "Scientists have been forced to withdraw a study on projected sea level rise due to global warming after finding mistakes that undermined the findings."
-----------
This past six months has just been one blow after another to the scientific basis for global warming. Personally, I think there has been a clear warming trend since 1850 or so. But you have to question the most dramatic predictions, which appear to rest on projections from data that have some significant problems.
Posted by Evan McKenzie at 7:44 PM No comments: Links to this post