Calculated Risk: Employment Report: 190K Jobs Lost, 10.2% Unemployment Rate
If you want some historical perspective, take a look at the second graph that accompanies the post I linked to. It is a shocker.
Posted by Evan McKenzie at 2:49 PM No comments: Links to this post

Many California jobs 'saved' by stimulus funds weren't in jeopardy - Sacramento News - Local and Breaking Sacramento News | Sacramento Bee: "Up to one-fourth of the 110,000 jobs reported as saved by federal stimulus money in California probably never were in danger, a Bee review has found."
---------
There are numerous scattered reports from all over the nation to the same effect. It is beginning to look like a deliberate deception.
Posted by Evan McKenzie at 8:32 AM No comments: Links to this post

Unemployment Rate Tops 10 Percent as 16 Million People Look for Jobs - FOXNews.com
Boy, that recovery is just rocking right along, isn't it?
Posted by Evan McKenzie at 8:27 AM 1 comment: Links to this post

ConsumerMan: Chinese drywall a big threat - ConsumerMan- msnbc.com: "The problem is enormous. It’s estimated that as many as 100,000 homes across the country, built between 2004 and 2008, could have defective and potentially dangerous Chinese drywall.

The bad wallboard has excessively high levels of sulfur. Homeowners complain the fumes given off make them sick and corrode the copper in home wiring, fixtures and appliances, including computers, televisions and air conditioners."
-------------
What percentage of these homes--new, built between 2004 and 2008--are in CIDs? I would say nearly all, but I wonder what others have to say. Needless to say, the lawyers are all over this.
Posted by Evan McKenzie at 8:58 PM 2 comments: Links to this post

Drive-bys in the Poconos

Update: Police search for suspect in drive-by shooting of 17-year-old in Emerald Lakes Monday | PoconoRecord.com: "LONG POND -- Police are seeking the public's help with an apparent drive-by shooting of a 17-year-old teen as he rode a motorized scooter on Glade Drive South in the Emerald Lakes private community Monday night...The Emerald Lakes development was the scene of another shooting over the weekend in which four people were wounded outside a private party around 12:45 a.m. Sunday."
---------
Hmmmmm. Private parties, private community...drive by shootings?
Thanks to Cynthia Stephens for this link.
Posted by Evan McKenzie at 5:40 PM 3 comments: Links to this post

Daily Herald | Utility tax moves forward in Antioch: "The village has cut the equivalent of 20 full-time positions in the last two years, Keim said. Officials have also cut nearly $500,000 in spending this year.

With the failure of Neumann Homes, the stalled Antioch Market Place shopping center project and a decline in revenue from building permits, Keim said the village is on target to finish their fiscal year nearly $500,000 in the red. The total operating budget is just over $10.5 million.

'We can't close that gap,' he said."
----------
So Antioch is raising taxes. In a recession. In a working class/middle class community where people are struggling to survive as it is. And note the story I posted below: corporate developer/bad citizen Neumann Homes is partly to blame for Antioch's dire straits, but Neumann is suing Antioch for return of its impact fees. Nerve? Oh, yes.
Posted by Evan McKenzie at 7:55 AM No comments: Links to this post

Daily Herald | Communities try to help as suburban foreclosure crisis grows: "Elgin is using federal money to help rehab foreclosed homes. Lake County intends to use stimulus funds to acquire, fix up and resell abandoned or foreclosed properties. Prosperous towns like Geneva, Schaumburg, Wheaton and Naperville are looking for ways to direct desperate homeowners to community resources."
------------
Foreclosures are up 18% in the third quarter. Of 2009. Tell me more about this so-called "recovery" we are enjoying?
Posted by Evan McKenzie at 7:53 AM No comments: Links to this post 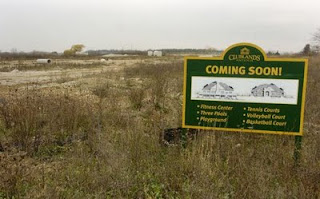 Daily Herald | Bankrupt Neumann Homes sues towns to return impact fees: "Neumann Homes Inc., which had been one of the 10 largest homebuilders in the Chicago area before filing bankruptcy last year, has sued more than two dozen municipal governments on a theory that, if valid, could be another hit in already-depressed local budgets.

Neumann, based in Warrenville, sued towns including Antioch; Naperville; Kenosha, Wis.; and Aurora, Colo., to get back impact fees, according to documents filed in U.S. Bankruptcy Court in Chicago."
----------------
This photo shows what they left behind in the subdivision close to my house. They wrecked a huge natural landscape and left it looking like the moon. Then they went bankrupt. Antioch had to fix bad drainage problems, plow snow, etc., and they are in huge budget trouble (see my post above). Now Neumann is suing for their impact fees. From where I sit, Antioch should be suing Neumann for the "impact" they made.

And here is the supreme irony: Antioch tried to stop this development from the outset, refusing to permit it. Neumann Homes sued Antioch and won, with some judge cramming the development down the village's throat. So, this corporate bad citizen sued to impose the development on everybody, then went bankrupt, leaving a devastated landscape, bereft owners, and a village in trouble. And now...they sue Antioch again to get their impact fees back.

This is why people don't like real estate developers. Or their lawyers.
Posted by Evan McKenzie at 6:57 AM 3 comments: Links to this post

Just got a message from the President of the University of Illinois system. Good news: no furloughs before the end of 2009. Bad news: the state owes the U of I system $317 million that has been billed but not paid.

They haven't paid our dental plan, either, which is why the dental plan won't pay my kids' dentist.

But look at the up side. The state legislature just guaranteed all seniors free rides on public transportation, no matter how rich they are.
Posted by Evan McKenzie at 6:27 AM 2 comments: Links to this post

The Golden State isn't worth it -- latimes.com

The Golden State isn't worth it -- latimes.com: "Joel Kotkin of NewGeography.com and Chapman University told the Los Angeles Times in March: 'Twenty years ago, you could go to Texas, where they had very low taxes, and you would see the difference between there and California. Today, you go to Texas, the roads are no worse, the public schools are not great but are better than or equal to ours, and their universities are good. The bargain between California's government and the middle class is constantly being renegotiated to the disadvantage of the middle class.'"
------------
Blockbuster article that shows why California's entire model of political economy has failed.
Posted by Evan McKenzie at 7:35 PM 1 comment: Links to this post