"Her daily chores involve tending to her vegetable plot and collecting fruit, looking after her three goats, seven chickens and two horses and chopping firewood. She gets her drinking water from a nearby stream and only rarely ventures to the shops for treats like rice and chocolate."
--------------------------
Nice digs.
Posted by Evan McKenzie at 8:09 AM No comments:

Sun City COA officials want laws amended to protect residents
The board wants legislative action to protect people against excessive fees charged by management companies. This is a reaction to the federal lawsuit filed by J. Roger Wood that alleges there is a widespread practice of charging excessive fees for routine services that should be free or much less expensive.
Posted by Evan McKenzie at 8:01 AM No comments:

In Pictures: the Year's 13 Most Gloriously Hideous Listings - Year in Curbed 2012 - Curbed National

In Pictures: the Year's 13 Most Gloriously Hideous Listings - Year in Curbed 2012 - Curbed National
The year in bad taste...

Posted by Evan McKenzie at 6:20 AM No comments:

URI leader defends prof's NRA remark as protected speech | First Amendment Center – news, commentary, analysis on free speech, press, religion, assembly, petition:
The president of the University of Rhode Island has issued a statement supporting the right of a professor to express his views after he called for the National Rifle Association CEO’s “head on a stick.”
President David Dooley’s comments on Dec. 23 came after a statement last week in which Dooley distanced the university from a posting on Twitter by history professor Erik Loomis. Loomis wrote the post on Dec. 14, the day 20 children and six adults were killed by a gunman using a semi-automatic weapon inside a Newtown, Conn., elementary school.
“I was heartbroken in the first 20 mass murders. Now I want Wayne LaPierre’s head on a stick,” Loomis wrote. LaPierre is the chief executive of the NRA, the nation’s largest gun-rights lobby.
-----------
This professor doesn't have tenure. Gun nuts tried to get him fired after he made the "head on a stick" comment on Twitter.  As with the Michael Mann lawsuit against National Review Online (see below), this situation raises some interesting issues about how freedom of expression and academic freedom operate with highly-charged political issues that play out across the internet.  The editorial function is either absent or involves less time for deliberation, so things are often "published" that in years past might have been edited out.  And now instead of a  daily news cycle, we have instant reverberations across social media platforms.
Posted by Evan McKenzie at 8:27 AM 1 comment:

his will be an interesting lawsuit to watch. Penn State climate change scientist and Nobel Laureate Michael Mann is suing National Review Online, the Competitive Enterprise Institute, and right wing "journalists" Marc Steyn and Rand Simberg for defamation. They accused him of academic fraud for his work on climate change and basically compared him to Penn State child molester Jerry Sandusky. The price of climate change denial just went up. Mann is represented by Cozen O'Connor. It isn't fun to be sued by those folks. NRO is already doing online begging for money.


And it is worth noting that internet posts accusing other people of crime, fraud, and other moral failings are risky propositions these days.
Posted by Evan McKenzie at 7:32 AM 1 comment:

Clay Twp. basin topic of Thursday meeting - News: At the meeting, the letter states, a homeowners' association will be established and members elected. The association will then take over care and maintenance of the stormwater basin.

That doesn't sit well with David Martin and some of his neighbors.

"This really should go to Clay Township, and they should be responsible," said Martin, whose Foggy Bottom Road home is a stone's throw from the basin. "We pay them through our taxes to take care of property like this."

But in the case of Wildflower Pond, buyers purchasing houses in the development signed an agreement that a homeowners' association would be formed.
------------
Welcome to Privatopia, where you render taxes to both public and private governments.  And don't ask the former to bear the cost of maintaining retention basins and repairing deteriorating thoroughfares and sinkholes.  After all, you agreed that's not their responsibility, didn't you?
Posted by Fred Pilot at 10:46 PM No comments:

We're broke," said Sam Marsala. "We're terribly in the hole. That's all I can say."

According to court records, Marsala's bank account was garnished five days ago. He said he thinks he owes his homes association about $4,300 in back dues, money it uses to maintain the swimming pool, landscaping and trash pickup.

"I'm not going to deny that I owe them some money," he said.

Marsala said he's an electrical engineer, but his business in the solar industry hasn't been very good for several years. He's also taking care of his granddaughter, Fiona, who was born two years ago with a rare, terminal form of epilepsy.
-------------
So much for the quaint notion that HOA private government is less impersonal and bureaucratic and fosters community. HOAs want their money just as much as the county tax assessor --- regardless of whether it's Christmas or the Fourth of July.
Posted by Fred Pilot at 10:08 PM 2 comments:

Summit Combined Housing Authority to help with special assessments in 2013 | SummitDaily.com: The special assessment program was created from the remains of a down payment assistance loan program, which is being discontinued because many lenders would not approve the funds.

The money from that program has been rolled over to create the special assessment loan program.
-----------
Now loans will be offered to defer capital expenses in Privatopia.
Posted by Fred Pilot at 11:13 AM No comments:

Turf war: Homeowners called before their association’s board for installing an artificial lawn 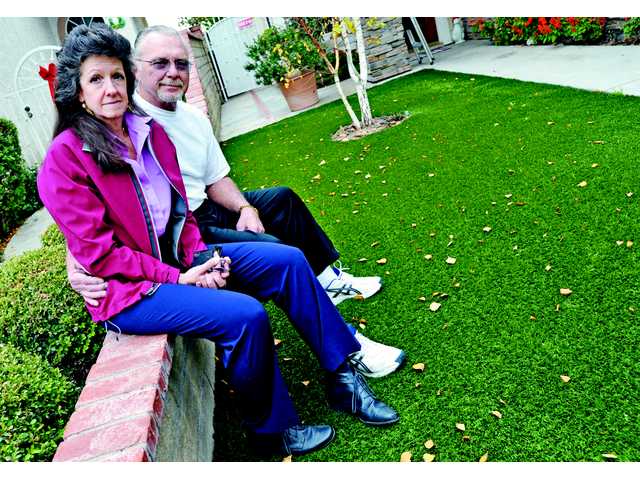 Turf war: Homeowners called before their association’s board for installing an artificial lawn: The couple is only saving around $250 per year in watering costs, because they also have shrubs, flowers, rose bushes and trees in the middle of their lawn, those landscape features still require watering, Dawn said.

But now, the DeVine-Pelt couple said they have been called before their HOA’s board on Jan. 8 to discuss the installation of the lawn. And, it’s possible they could be ordered to remove the lawn if the board does not give post-installation approval, she said.

“I thought that Santa Clarita was water-wise friendly,” Dawn said.
-----------
Maybe it is. But thanks to policies favoring the establishment of another (private) layer of local government, property owners must contend with another regulatory regime.
Posted by Fred Pilot at 7:34 PM No comments: