In France, a Retirement Co-op Ensures Seniors Are Not Treated as Commodities

In France, a Retirement Co-op Ensures Seniors Are Not Treated as Commodities

"They didn't want to end up in a traditional retirement home. They wanted to remain the actors in their own lives. Seven years after their first discussions about how to age well, a group of retired people is starting to build the first co-op for the aging. Non-speculation, democracy and environmental concern are the foundations of the "Chamarel-Les Barges" project, located in a neighborhood of Vaulx-en-Velin, east of Lyon, France. The project is so inspiring that the bank has even conferred a 50-year loan to the founders, who are in their 60s."

Housing cooperatives are not popular with the real estate industry, bankers, or title companies. They love condominium ownership because it creates many individual units that can be bought and sold, creating a whole lot of business for everybody involved in real estate transactions.  But most of the people who live in co-ops find them a good living and ownership arrangement. In a co-op, each resident has a proprietary lease that entitles them to exclusive occupancy of their unit, and also a share of stock in the corporation that owns the entire property. In other words, each resident is a tenant, and collectively they are their own landlord. There is only one blanket mortgage on the whole property. And in order to sell a share, the new prospective owner has to be approved by the co-op board.  Usually co-op shares are not viewed primarily as investments, as many condominium units are, so there is more permanence and less selling at the slightest sign of falling real estate prices. There seems to be less conflict in co-ops than in condominiums, and on the whole they survived the crash better than condominiums, or at least that seems to be the predominant opinion.
Posted by Evan McKenzie at 10:43 AM 5 comments: Links to this post

Yesterday I was contacted by somebody who is interested in making more people aware of this situation through various means.  The person says it is a much larger story than the article indicates. I am not authorized to give out this person's contact information, but if anybody wants to follow up and learn more about the case, send me an email at ecmlaw@gmail.com and I will pass your contact info along to the person in question.

Three men allegedly stole at least $75,000 from a Jersey City condominium, pocketing money intended for repairs, loan repayments and other costs.  Raymond Gonzalez and Raul Miranda, of Hackensack-based property management company, RPM Group, and Jose Astuto, owner of Queen Remodeling Corp., in North Bergen, have been charged with conspiring to steal between $75,000 and $500,000 from the Berkeley Carteret Condominium Association, according to an indictment provided on Wednesday by the Hudson County Prosecutor's Office. They allegedly stole money from residents of the Jersey City community--located at 53 Duncan Ave.--intended for general property maintenance, loan repayment and other purposes. Representatives for the condominium could not immediately be reached for comment.  The three men are charged with money laundering and conspiracy, according to the indictment. Gonzalez and Miranda face additional theft by deception and theft by failure to make required disposition of property received charges, according to the indictment. Assistant Prosecutor Gene Rubino would not provide additional information on the allegations against the men. The men did not immediately return calls for comment on Wednesday.
Posted by Evan McKenzie at 9:17 AM No comments: Links to this post

The next housing crisis is here - Yahoo Finance

The next housing crisis is here - Yahoo Finance

See my post below about new housing starts staying very low since the recession.  Here's one view saying that there are few new starter homes on the market, the ones that exist are getting bought up by investors, and mortgage lenders are still picky about making loans. That's all supply side.  But I think at the core of the housing market problems is one simple demand side fact: an awful lot of young people can't afford to buy starter homes. That's why developers aren't building them. Millennials are saddled with student loans, many of them are working in jobs that don't pay much so they can't save a down payment, and government is doing bupkis to address these problems. So lenders don't see them as good credit risks.

Thanks to Fred Pilot for this link.

"Following the mid-aughts housing bubble that saw homeowners across the country get themselves upside down in homes and mortgages they couldn't ever afford to repay — a crisis that was as much about too much supply as it was about too much bad financing — the market has gone the complete other direction. First-time homebuyers are crowded out, with Trulia's chief economist Ralph McLaughlin writing Monday that the number of starter homes on the market has declined 43.6% in the past four years. Homeowners who want to move from a starter home to something better can't afford the next step. McLaughlin notes that the number of "trade-up" homes on the market is also down about 40% over the same period. Meanwhile, mortgage lenders, despite record-low rates, are still reluctant to extend credit to less-than-superb borrowers. And as investors look for places to earn whatever return on capital they can muster, the low end of the housing market has almost ceased to exist as the investor class has bought up homes with the plan to flip them."
Posted by Evan McKenzie at 12:58 PM 1 comment: Links to this post

This chart shows housing starts from 1960 to the present, with recessions shown as gray vertical lines. As you can see, housing starts nearly always decline just before the recession officially begins, and housing starts go up fast as the recession ends.  You can see the enormous overbuilding of the 1990-2005 years.  Then housing starts fell like a rock for three years before the Great Recession started. Then they stayed flat, at historically low levels, for several years after the recession ended. They have been crawling up the last few years, but still haven't reached average levels, even given that the US has a much larger population than before.  The real estate development industry was transformed by the housing boom and the housing bust. Nearly all the small and medium-sized developers were wiped out, and now the industry is dominated as never before by a few giant, publicly -traded corporations.  When they do residential development, they build virtually nothing except CIDs.  They are national or international firms that are able to dictate terms to small suburban municipal governments, as in "take it or leave it--we do it our way or we go someplace else." 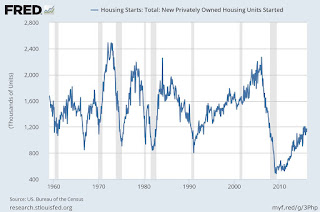