HOA forecloses on Mesa homeowner | azfamily.com Phoenix
She also stopped paying her monthly dues to the Fountain of the Sun Homeowners Association -- a requirement. She claims the HOA wasn't doing anything to keep up the neighborhood.“They’re voted in. They do whatever they want with our money,” she said.As a result, Brummer's HOA fees became so overdue that the HOA took her to court. In March, it actually won a judgment to foreclose on her home.The foreclosure is to collect a total of $16,000. Nearly $13,000 are for HOA attorney fees, and the remainder is unpaid HOA dues and interest.Brummer says she had no idea not paying HOA dues came with such a heavy price.
----------------------


So it seems that she knew she had an HOA but didn't like the way they did things, and she says she didn't know they could foreclose, so she stopped paying.  Eventually the HOA got a foreclosure judgment. This is a pretty shocking level of misunderstanding on her part.  If a person lives in an HOA with mandatory membership and mandatory assessments, it is child's play to enforce those obligations.


George Staropoli says, of this situation:  "“The laws are pro-HOA laws,” Staropoll said. “The CC&Rs are adhesion contracts. The homeowner who lives in a homeowner association is deprived of the rights, privileges, and freedoms that he enjoys outside the HOA. Why are they taken away from him?”
That's true--there are a lot of "pro-HOA laws" that put owners at a disadvantage, as George says. However, this case would be an open and shut foreclosure under any state's laws, based on what is in this news account. It looks like a matter of complete ignorance of the entire concept.


Maybe the Arizona state government should make sure people know what they are getting into when they buy into an HOA. Or maybe they should address the amount of attorney fees relative to the dues and late charges in question (in this case, $13,000 for the lawyers, $3000 for the HOA).  Every session the AZ legislature takes up a bunch of HOA reform bills, but I wonder sometimes if Arizona is like Texas--a place where, when all is said and done, the political climate just isn't particularly supportive of government protecting consumers.  Arizona is one of those red states where most of the voters seem to think we don't need no guvmint interfering in people's bidness.  (They would all die of thirst in three days if not for their dependence on the federal government for "the largest and most expensive aqueduct system ever constructed in the United States",but leave that aside for the moment.)  They keep voting for hard-right people like Jan Brewer, Jon Kyl, and Jeff Flake. Now they are going big for private prisons that are a bad deal.  Government bad, private sector good. And that kind of political culture isn't conducive to serious consumer protection.


Thanks to Fred Pilot for the link.
Posted by Evan McKenzie at 8:31 AM 4 comments: Links to this post

Residents question HOA accountability | KXAN.com
AUSTIN (KXAN) - A dispute over what could be more than $1 million in unaccounted-for spending by an Austin homeowners association has sparked a police inquiry into possible fraud and theft, a KXAN investigation has confirmed.
---------
Yes...another one.
Thanks to Fred Pilot for the link.
Posted by Evan McKenzie at 9:19 AM 1 comment: Links to this post

NYC's First Million Dollar Parking Spot to Hit Market - Local News - New York, NY - msnbc.com
The private parking spot is located inside an eight-story luxury condominium building at 66 E. 11th St., and will come with its own deed and sales contract, the New York Post reports. Like a condo, it will be charged maintenance fees.
----------------------
So the 0.0001% are doing fine, thank you very much.
Posted by Evan McKenzie at 10:01 AM No comments: Links to this post

Inmates seized control of a privately owned prison in Mississippi on Sunday after riots broke out, and a guard was killed in the chaos in the low security facility, authorities said. Adams County Coroner James Lee said the 23-year-old guard died of blunt trauma to the head during the riot at the Adams County Correctional Center, a privately owned prison that houses mostly illegal immigrants for the Federal Bureau of Prisons. "This is an ongoing riot that still has not been rectified because the prisoners are in still in charge of the prison," Lee said, speaking at around 9 p.m. local time. The disturbance in the 2,567-bed prison began on Sunday afternoon inside the facility in Natchez, Mississippi, the Corrections Corporation of America, which owns the prison, said in a statement.
--------------------------------
This experiment in privatization doesn't seem to be turning out so well.
Posted by Evan McKenzie at 7:45 AM 1 comment: Links to this post

At home with the denizens of Slab City - video reveals the lives of weirdos, hippies and drug addicts inhabiting the lawless patch of California desert | Mail Online

At home with the denizens of Slab City - video reveals the lives of weirdos, hippies and drug addicts inhabiting the lawless patch of California desert | Mail Online 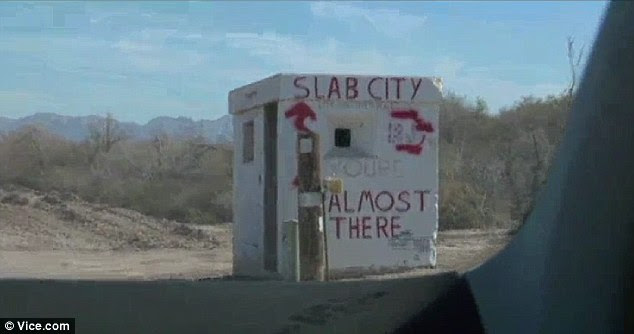 Posted by Evan McKenzie at 7:37 AM No comments: Links to this post