Debris is strewn across the 58-unit complex along the north fork of the New River. The doors and windows have been stripped away. Vandals have destroyed walls and ripped out copper wiring and plumbing. The city has been paying for metal shutters to keep away squatters.
----------------

Ever wonder what happens when an association goes defunct? It is not pretty.
And what happens to all those property values that were being protected?
Posted by Shu Bartholomew at 8:34 AM 4 comments: Links to this post

When a municipal election resembles Privatopia

Here's a story of a city council election out of Isleton, California, population 820, that might just as easily been about an HOA election. The incumbents are running unchallenged because the few candidates who considered running were apparently not sufficiently motivated to serve to even make sure their candidacy papers were in good order.
Posted by Fred Pilot at 10:33 PM No comments: Links to this post 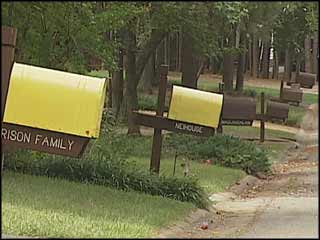 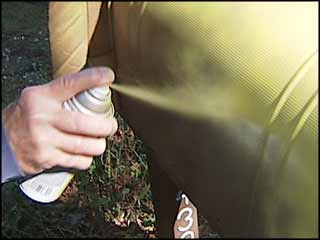 Day by day, more of the yellow boxes are popping up. In fact, one more for our camera early this morning. They are standing out in a community making a big visual statement about a decision that hits their wallet. But it's a decision that the community association board says has been publicized for months, like in the community newspaper.

They are hard to miss -- one yellow box after another. When-Dee Morrison spearheaded this protest. "They definitely stand out. It doesn't go with our park-like setting," Morrison said. This, just days after the Brandermill Community Association decided each home in this community must get this new mailbox. Those boxes would cost $155.
________________________________
As political scientists are wont to do, Evan McKenzie, the owner of this plot of cyberspace real estate, has labeled the yet unorganized political movement that rejects the authority of private HOA governance (but oddly doesn't lobby states to repeal HOA enabling statutes) as the Pink Flamingos.

That token of expressing discontent and defiance arose out of HOAs going after inmates who dared to plant the tacky pink plastic avian decorations on their front lawns, potentially driving down property values faster than a trailer park full of deteriorating double wide FEMA trailers.

Now another symbol of protest against dictatorial, unresponsive Privatopian government has emerged: the yellow mailbox. Perhaps not coincidentally the same color of the Gadsen "Don't Tread on Me" flag that has become the symbol of a somewhat more organized political movement called the Tea Party.
Posted by Fred Pilot at 10:54 PM 4 comments: Links to this post

Homeowner's Association Uses Chopper To Find Violations - Local 2 Investigates News Story - KPRC Houston
I'm posting this because an anonymous poster copied and pasted a huge part of the story into a comment. I'm deleting the comment and posting the link to the story.
Folks, we need to be a lot more careful about using big blocks of text from copyrighted on line news stories. There is a "fair use" doctrine that allows posting a little bit of these stories and then commenting, but just putting in all or most of a news story is copyright infringement. There are lawsuits going on against bloggers right now, for doing exactly that--even if the source was cited.
So please avoid this, OK? Keep the story snippets short and always include the source and hyperlink.
Posted by Evan McKenzie at 8:47 AM 1 comment: Links to this post

Big Brother is searching you - Computerworld

Big Brother is searching you - Computerworld

"The town of Riverhead on Long Island usedGoogle Earth to search all back yards in the town for illegal swimming pools.

They found about 250 pools built without permits and collected about $75,000 in fines."

This came from Mystery Reader. I remember prosecuting drug cases where the search warrant was based on aerial surveillance, and the Supreme Court ruled on issues such as how high the plane had to be, etc. But now government can use Google Earth and zoom right in.

Posted by Evan McKenzie at 8:07 AM No comments: Links to this post

FT.com / US / Economy & Fed - US state steps in to meet city’s debt cost
The state of Pennsylvania has stepped in to help its capital city Harrisburg avoid a default by advancing next year’s state aid so that the money can be used to make a $3.3m bond interest payment due this week.
----------------------
It seems to me that the policy makers of this country and the educated population ought to be figuring out how to restructure the financing of state and local governments, before we have a housing-industry-style, sector-wide, meltdown. Doesn't seem to be a major concern, though.
Posted by Evan McKenzie at 6:44 AM No comments: Links to this post

SIDE STREETS: HOA acting squirrelly at Lexington Park and everyone appears to be nuts

SIDE STREETS: HOA acting squirrelly at Lexington Park and everyone appears to be nuts

It sounded too wild to be true: A woman claimed her efforts to rescue a squirrel had incited the wrath of her homeowners association board and led to harassment, hundreds of dollars in fines, and even allegations of felony theft lodged against her with police.

So I contacted the president of the Lexington Park Townhomes HOA figuring I’d clear it up and move on.

But Chad Farris, the HOA president, declined to talk to me. Ordered me not to use his name. Wanted me to meet him “in a public place with my attorney present.”

Hmm. Maybe the squirrel lady isn’t nuts, after all.