Police checkpoint at Rolling Meadows apartment complex gets mixed reviews -- chicagotribune.com: "An aging Rolling Meadows apartment complex became a closed community of sorts this week when police blocked off every entrance but one, placing two officers there for eight hours a day and stopping all vehicle traffic coming in."
---------------
Mystery Reader sent this along. I saw this in the Tribune but thought I was reading The Onion.
Posted by Evan McKenzie at 11:30 PM No comments: Links to this post

Sacramento Bee: HOA sues hero Chuck Yeager: "[Famed test pilot and American legend Chuck] Yeager is being sued by his homeowners association, Pocket-area Park River Oak Estates, which claims he owes $12,000 in back association dues and fees. The suit, filed last month in Sacramento Superior Court, alleges that Yeager and his wife, Victoria Scott Yeager, have owned two condo units since 1998 and have not paid monthly dues for four years. Dues in the gated community are $240 per lot and cover costs of maintenance, repairs, security, landscaping and lighting.

The current law restricts the possession of swords with a blade 15 centimeters or longer. However, the dagger that Tomohiro Kato, 25, used in the stabbing rampage had a 13-centimeter blade and is not subject to restrictions under the law.

NPA officials said daggers are highly lethal weapons and are hardly necessary in people's daily lives."
--------
Governments seem to look constantly for excuses to render citizens helpless and dependent on government itself for sustenance, safety, community, and anything else they can find. One nutball goes crazy with a dagger and stabs people. Government response: ban possession of daggers. Here in the US we get the same reflex over firearms. Two simple facts: 1) people will always find ways to kill each other, so that problem is insoluble, and 2) governments will always try to seize as much power over people as they can, so they will never stop using the fantasy of a murder-free world as an excuse to disarm us. The result is that we can't protect ourselves from bad guys, so we are expected to rely on the government for that. They will never, ever, be able to do it, but they will become very powerful by virtue of the false promise of eventual success.
Posted by Evan McKenzie at 9:11 PM 2 comments: Links to this post 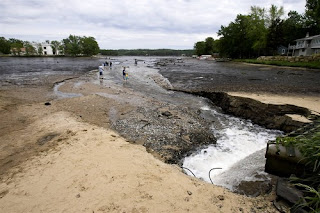 FOXNews.com - Flooding Hits Historic 500-Year Levels in Iowa : "The National Weather Service called flooding in Cedar Rapids, Iowa, a 'historic hydrologic event' Thursday as the swollen river poured over its banks at 500-year flood levels, forcing the evacuation of nearly 4,000 homes."
------------
In Wisconsin, Lake Delton rose so high it broke through its barriers and drained entirely into the Wisconsin River (the photo above is where the lake used to be). The former lake is now a mud flat, leaving the Wisconsin Dells tourist season in shreds just as it was about to start. Plenty of business are going to be ruined. Here in Lake County, IL, we are awaiting an imminent storm, coming on top of the ones that already inundated the area. But that is nothing compared to Iowa, where they are about to float away. After the waters recede people will start to assess the damage and call the insurance company. I wonder how many condo buildings and HOA properties are in trouble.
Posted by Evan McKenzie at 8:32 PM No comments: Links to this post 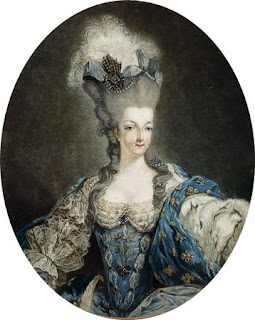 Mega-mansions are L.A.'s really big show - Los Angeles Times: "Unaffected by the economic woes besetting the masses, the super-rich are going on creating palace-like complexes. One builder says he knows of 20 houses of at least 20,000 square feet in the works."
----------------
As Marie Antionette said, "Let them eat cake."

Well, I for one am greatly relieved to hear that our betters are still able to construct their mansions. I would be heartbroken to learn that they were forced to live in squalor with less than 20,000 square feet at their disposal. I have that much room, if I include the street in front of my house and the park behind it.
Posted by Evan McKenzie at 8:56 AM No comments: Links to this post

MyFox Washington DC | Plan to Give Bethesda House to Homeless Family Nixed: "ROCKVILLE, Md. (AP) -- The Montgomery County Council has voted to demolish a house located on future parkland, rather than allow a needy family to live in it.

Residents of Bethesda's Hillmead neighborhood had bitterly fought the plan to house a homeless family on the property."
----------------------------
Sounds like a NIMBY situation.
Posted by Evan McKenzie at 9:21 AM No comments: Links to this post

Who dropped the ball? - Las Vegas Sun: "Banks and other mortgage lenders are turning out to be lousy neighbors. Foreclosed homes featuring brown lawns and fetid swimming pools litter the Las Vegas Valley because the lenders that hold title have failed to keep the properties up.

The epidemic is especially acute in neighborhoods regulated by homeowners associations, whose rules require property owners to maintain their properties. Enforcement of those rules is another matter, however."
--------------------
Thanks to Monica Caruso and Fred Pilot who both sent me this. I say hold onto your hat, because this is going to be a long and difficult ride for HOA and condo owners.

Update: Fred Pilot sent a comment to this post that I am taking the liberty of cutting and pasting here in the hope that more people will see it and respond:

"Who dropped the ball? I agree with the macroeconomic analysis that nobody in particular but everyone did. The housing market was fueled by irrational exuberance and its cousin, easy terms and conditions and minimal if any underwriting by the mortgage and financial markets that purchased the underlying mortgage obligations.

"Privately governed HOAs since they tend to have much smaller property tax bases than municipalities and counties will have a far more difficult time than the latter riding out this severe market correction to wring out the excesses of cheap and easy mortgages.

"The supporters and defenders of local government privatization don't seem to understand that in addition to lacking constitutional checks and balances on their exercise of power since they are not political subdivisions of the state, privately governed HOAs also lack sufficient fiscal (and political) economies of scale to easily sustain these kinds of inevitable market cycles. At some point, the fiscal pressures can become so great that the HOA also becomes unviable as a governing entity since no one desires to govern an entity that is effectively bankrupt." 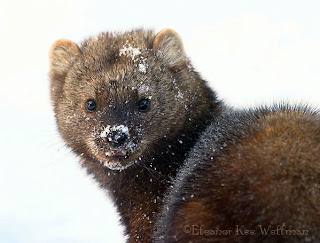 Fishers, Fierce Predators, Make a Home in the Suburbs - NYTimes.com: "Sinewy, with bushy tails and beady eyes, fishers weigh 5 to 15 pounds and live on land and in trees. They are mainly carnivorous, typically eating squirrels, mice, voles and other small animals, as well as nuts and seeds. Fishers are also one of the porcupine’s few enemies, killing it by attacking its snout and flipping it on its back.

The fisher belongs to the mustelid family, which includes weasels, otters and wolverines. It has the aggressive, carnivorous temperament of a wolverine and can climb trees like a marten. Like weasels, a fisher will kill multiple animals at a time in a confined space. Fishers are nocturnal and not easily spotted."
----------------
These things are nasty. They can drive a bear away from his dinner. On top of the mortgage meltdown, this is obviously one of the last signs of the Apocalypse.
Posted by Evan McKenzie at 12:03 PM No comments: Links to this post

Ms Property Manager: You Suck « Random Inkings
Posted by Evan McKenzie at 11:14 PM No comments: Links to this post