Vegas HOA Charged With Discrimination - Las Vegas News Story - KVVU Las Vegas
"A Las Vegas homeowners association is accused of restricting its housing to residents older than 55, according to the U.S. Department of Housing and Urban Development.

The agency on Friday charged Lakeside Village Homeowners Association and its management company, Castle Management and Consulting, LLC, with discriminating against families with children through illegal age requirements."
-----------------------
Thanks to Rodney Gray for this pointer.
Posted by Evan McKenzie at 7:13 AM No comments: Links to this post

It's pretty simple, said Solomon. Just do what Lantry and his family did, move out and never move into an HOA neighborhood again.

"Why would I want another incompetent level of government standing in judgment of me?" said Lantry.

HOA Syndrome is not recognized as an anxiety disorder by the psychology community. However, Solomon said that it's only a matter of time."
---------------------------
Well, at least there is a treatment. Thanks to Fred Fischer for this link.
Posted by Evan McKenzie at 7:10 AM 1 comment: Links to this post

Arizona SWAT Team Shoots Latino Former Marine Dozens of Times - COLORLINES
This is a very disturbing story. I am going to keep track of it and see if it is as bad as it looks from this initial report.
Posted by Evan McKenzie at 10:52 PM No comments: Links to this post

It's a 55 and older community. 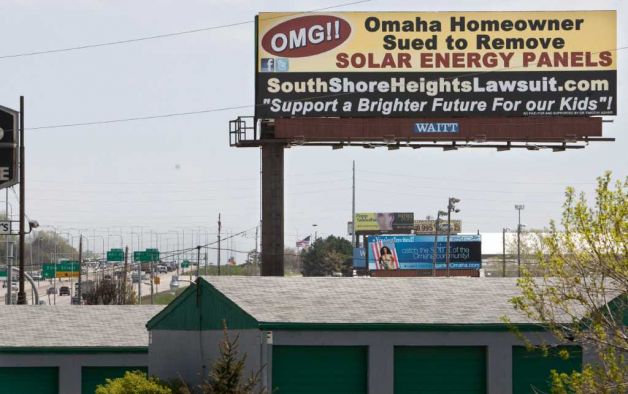 The Omaha resident has turned a dispute with his neighborhood association into a public battle, putting up billboards, launching a website and taking to social media to publicize a lawsuit filed against him over the installation of solar panels on the roof of his home near Lake Zorinsky.

"It's not about money," said Adams, 49. "It's about sticking up for principles. If it's about spending tens of thousands of dollars educating people, I will do it."
Posted by Fred Pilot at 8:33 AM 3 comments: Links to this post

Ron Paul: I Would Not Have Voted For The 1964 Civil Rights Act (VIDEO) | TPMDC

Ron Paul: I Would Not Have Voted For The 1964 Civil Rights Act (VIDEO) | TPMDC
"Just about a year after his son Rand Paul stepped in it when he told Rachel Maddow he was opposed to provisions of the 1964 Civil Rights Act, Rep. Ron Paul (R-TX) told Chris Matthews Friday he wouldn't have voted for the law in the first place had he been in Congress at the time."
-----------------
These father and son cranks are great examples the libertarian movement. Libertarians dress, walk, and talk like normal people so people don't realize how outlandish their ideas are. Rand and Ron look like plain old folks, but if they dressed to suit their ideas they'd be wearing purple velvet leisure suits and propeller beanies.
Posted by Evan McKenzie at 8:16 PM No comments: Links to this post

A pattern of HUD projects stalled or abandoned - The Washington Post

A pattern of HUD projects stalled or abandoned - The Washington Post
"The federal government’s largest housing construction program for the poor has squandered hundreds of millions of dollars on stalled or abandoned projects and routinely failed to crack down on derelict developers or the local housing agencies that funded them.

Nationwide, nearly 700 projects awarded $400 million have been idling for years, a Washington Post investigation found. Some have languished for a decade or longer even as much of the country struggles with record-high foreclosures and a dramatic loss of affordable housing."
------------------------
Federal housing policy has been one disaster after another since the 1960s.
Posted by Evan McKenzie at 4:04 PM No comments: Links to this post