Busch put a sign on his garage stating he should have property rights and there should not be an HOA. He's been fighting with the Sand Lake Hills homeowners association since 2008. He sued the HOA and 99 homeowners because he claims the HOA was formed illegally.

PROSPER — An e-mail sent by a homeowners' association in Prosper is angering victims of Sunday night's thunderstorms. Neighbors in the Preston Lakes subdivision worry that community rules outlining homes' appearance may slow their rebuilding from damage caused by the violent storm that pelted properties with golf ball-sized hailstones.

"You don't say that less than 24 hours after something like this hits you," said Cindy Stuver, who lost nearly half her windows to the hailstorm. "That's wrong!"  She and others are furious about the e-mail blast sent out by the local homeowners' association.

"This e-mail is to just make sure that everyone in our community is OK," HOA board member Shelly Van Blarcum wrote. The message went on to remind residents of the neighborhood guidelines that dictate homes' appearance — including the type of windows used and the color of shingles.
---------------------------------------------------
This story shows how HOAs are not viewed by their constituents as a helpful entity but instead as intrusive and over controlling.
Posted by Fred Pilot at 9:38 AM 2 comments: Links to this post

To be released on May 2. You can pre-order it by using the link. 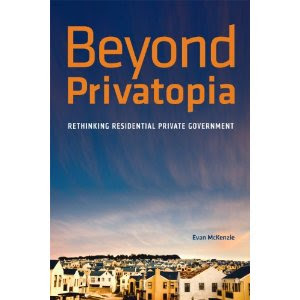 Posted by Evan McKenzie at 9:35 AM 4 comments: Links to this post

"LAGUNA WOODS – The largest homeowners association in Laguna Woods Village that recently prohibited residents from hoarding, will consider a policy that would limit where residents can smoke. The board of directors for United Mutual, a cooperative housing association that governs 6323 units, will meet Tuesday to consider a policy that could prohibit smoking inside all or a portion of units and in common areas."
-----------------
Can't hoard, can't smoke...how's a neurotic supposed to have any fun?
Posted by Evan McKenzie at 9:01 AM 6 comments: Links to this post

Center for American Progress: The Perils of Privatizing our Mortgage Finance System

With links to reports on the subject.
Posted by Evan McKenzie at 8:45 PM 2 comments: Links to this post